Online Poker in the US – Is it Legal? Limit Hold’em Heads Up – PokerStars vs Full Tilt Poker 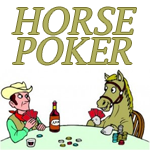 If you like poker, and not just one specific game of poker, but all the varieties of poker games available, you’ll probably enjoy playing mixed games. Playing mixed game tables is one of the most fun ways to play poker. The game is always changing, so you never find yourself growing bored with the same game, and spotting some poor unsuspecting flounder that has unwittingly wandered its way into the shark pool is especially easy.  Even seasoned poker players can be caught off guard if they’re not paying attention when the game changes.

Mixed games are a mix of several different poker games in one. Nearly every online poker room offers at least a few different mixed games available to play both for real money, or to play for free. The rules for when the game changes during mixed games varies on the type f game you’re playing as well as the online poker room you’re playing at. Mixed game tournaments change games every round, so there is a fixed amount of time during which each game is played. At the beginning of each new round, (when the blinds increase) the game changes. If you’re playing a cash game, there is a set number of hands for each game. Depending on the site you’re playing on, this is usually every 8 to 10 hands.

HORSE is a blend of limit hold-em (H), Omaha hi-lo (O), razz (R), stud (S), and stud hi-lo (E.) Each game comes in the order of its respective letter, then repeats once you finished the last round.

HOSE is exactly like HORSE without the round of razz.

HEROS has the same games that are in HORSE, but in a different order: limit hold-em, stud hi-lo, razz, Omaha hi-lo, and stud.

HA is similar to HO except that instead of Omaha hi-lo you are playing Omaha for the second round.

If you enjoyed reading this article, please consider sharing it!